Why Middle East cities should worry about climate change 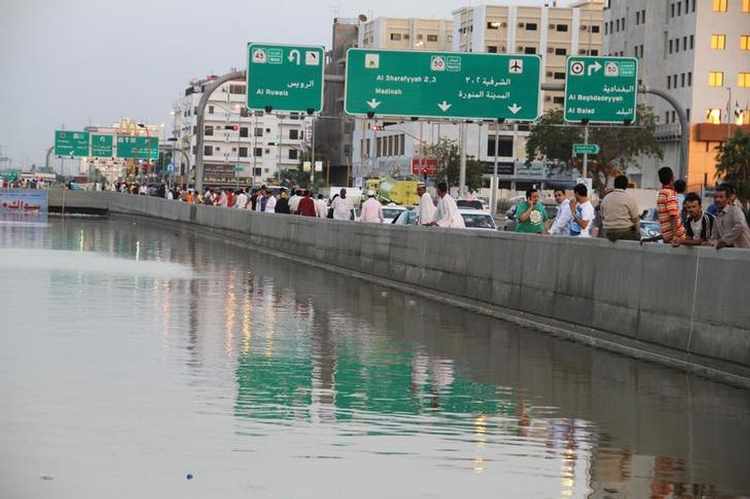 Several areas in the MENA region could begin to experience periodic floods in coming years.

The impact of climate change on human civilization will be “incredibly disruptive,” yet as long as the issue is viewed as a “slow-motion crash” people around the world will continue to underestimate its magnitude and urgency.

That warning by Jonathan Pershing, climate envoy under the Obama administration and program director of environment at the William and Flora Hewlett Foundation, comes as a study reveals that 150 million people now live in areas at risk of coastal flooding by 2050 — three times the estimate of previous reports.

The new research, published in the journal Nature Communications, suggests that global sea levels will rise between 20 cm and 30 cm by mid-century, wiping out at least a dozen cities worldwide.

The Middle East and North Africa (MENA) region is not exempt from the impact of rising sea levels, with Egypt’s second-largest city Alexandria and Basra in Iraq identified as areas facing high threat.

The findings, released by Climate Central, a science organization based in New Jersey, are based on an artificial intelligence device — CoastalDEM — that was used to correct the error rate in previous data on rising sea levels.

In a phone interview with Arab News from California, Pershing said the scientific community is in agreement over the extent of the projected damage, calling Climate Central’s measurements “increasingly clear.”

Many scientists point to catastrophic floods and violent climate patterns on different continents as telltale signs of global warming. The new study confirms that the largest vulnerable populations are concentrated in Asia.

More than 70 percent of people worldwide living in threatened areas are in eight Asian countries: China, Bangladesh, India, Vietnam, Indonesia, Thailand, the Philippines, and Japan, according to the study.

Alexandria is one of several low-lying, coastal cities in the MENA region at serious risk of being submerged in the next three decades.

“Much of the city is going to be inundated on a pretty regular basis,” slowly becoming uninhabitable to over 5 million residents, Pershing said.

This is likely to cause an influx of people moving inland to Cairo, an already overcrowded city with a population of 9.5 million.

However, Pershing pointed out that even Cairo is subject to inundation and likely to suffer from “substantial flooding,” which could lead to an enormous displacement crisis.

Underscoring the urgency of planning for an inevitable future of extreme weather, he said that several areas in the MENA region could begin to experience periodic floods in coming years. These include Basra, Beirut, Kuwait City, Dubai, Manama, Sharm El-Sheikh, Dammam, Jeddah and many fishing villages in Yemen.

“Djibouti will also be threatened, and if we go further down to Qatar, the whole country is on a flat, flood plain,” Pershing said, adding that Doha’s new crop of buildings along the corniche are “not more than a meter above sea level.”

Matt Smith, associate head of the School of Energy, Geoscience, Infrastructure and Society at Heriot-Watt University in Dubai, said that while Alexandria and Basra have been revealed as the two most populated urban areas in the Middle East particularly vulnerable to rising sea levels, any settlement or population center on low-lying coasts is vulnerable.

“Basra is in what was low-lying marshland, next to the Euphrates River. The area roughly south of Baghdad to the Arabian Gulf, along with the Euphrates and Tigris rivers, is low-lying floodplains and deltas where the Euphrates enters the Gulf,” Smith told Arab News.

“The area is susceptible to seasonal flooding from the rivers and also any increase in sea level. Similarly, Alexandria is situated on the Nile delta. Many cities around the world are built on deltas and are typically more vulnerable to storms and rain-induced river floods.

“Assuming the sea level does rise as predicted, low-lying cities on deltas will be especially at risk of flooding and the increased impact of storms and river floods.”

Pershing said that cities historically originated and grew near trade routes located by the oceans, so even economic hubs such as London, New York and Paris are “threatened” by the projected sea-level rise.

In the MENA region, a sea-level rise will trigger large-scale population migration accompanied by a surge in social and political instability and worsening refugee crises.

The water conflict over the Nile is a case in point, said Pershing. Countries surrounding the river have spent decades trying to reach an equitable water-sharing arrangement considering the “current” amount of water in the river.

5m – current population of Alexandria, which will slowly become uninhabitable, causing an influx of people moving inland to Cairo, an already overcrowded city with 9.5 million residents.

“What would this arrangement look like if millions of people had to move not because of water scarcity but because of flooding in coastal cities?” he asked.

Despite the dire climate scenarios, many countries in the Middle East, including the GCC states, have revenue structures and economies deeply linked to the production and extraction of fossil fuels, Pershing said.

“Oil is one of the culprits of climate change,” he said, adding that tackling climate change will prove a big challenge for oil-producing countries.

Nevertheless, with all the data in hand, it is up to humanity to decide how disruptive the future will be, according to Pershing.

“Some argue if we do not do this, it will lead to a collapse of ecological systems, large sea-level rises and displacement of large numbers of countries’ populations,” he told Arab News.

“There is actually a lot of subtlety and nuance in these climate debates, but because most people only read the headlines, skepticism, misunderstanding and argument tend to occur.”

Smith said that oil and gas “are not going to last forever. Therefore, it seems prudent to keep an open mind about the possible consequences of a changing climate and to look for non-carbon alternatives and complementary technologies which could also be the foundation of future industries and economic prosperity.”

CITIES MOST AT RISK

One way of achieving this would be through economic diversification by oil-producing countries. Pershing described Saudi Arabia’s investments in solar energy as a step in the right direction, adding that the Kingdom could become the region’s leading solar power exporter.

The UAE’s emergence as a business and financial hub is another example, with its diverse investments in advanced technology and artificial intelligence (AI).

Pershing also draws attention to the Arab world’s accessibility to “large-scale (oil and gas) reservoirs” that are crucial for carbon capture and sequestration, a process that traps carbon dioxide at its source before transporting it for storage and isolation.

Technology will play a role in both the “mitigation side” and the “adaptation process” of dealing with climate change, according to Pershing. AI and advanced technologies will increase the capacity to look at huge amounts of data, offering clear analysis of future risks and effective contingency planning.

“It provides us with everything from sea-level gauges, which tell us exactly how much the sea level is rising, to satellite imagery, which can tell us which homes will be affected,” he said.

Paradoxically, the same technology that might help limit the effects of climate change has revealed that if even if emissions of greenhouse gases stop overnight, the world’s oceans are still likely to rise another 45 cm by 2100.

Against this backdrop of looming danger, Pershing said, President Donald Trump made a “significant miscalculation” about climate science, leading many around the world to ignore an extremely serious threat.

“Trump is moving us down the road in which long-term planning is devalued and real risks like climate change are vastly underestimated,” he said.

Marc Mcilhone is ArabBrains' Editor - sourcing news and features content and overseeing the work of the site’s contributors. Marc’s work is informed by his technical background in architecture having worked for some of the UK’s leading practices on projects within the education, healthcare and housing sectors. Marc has a particular interest in how innovators are creating sustainable solutions that have a positive impact on people’s everyday lives. Please email press releases and news to: editor@arabbrains.com
Previous Etisalat launches first OpenRAN network in MENA Region
Next Beckman Coulter embarks on educational roadshow to support Women’s Health in UAE